In London, debate over the Thomas Heatherwick-designed Garden Bridge continues. Will Self’s piece in the Guardian this week was a particularly lucid contribution to the discussion. As Self argues, the bridge is significant for what it represents — corporate encroachment into public spaces:

In a London increasingly characterised by the erosion of genuinely public space and its replacement by pseudo-public spaces controlled by private corporations (with the assistance of the police, now that Public Space Protection Orders are being introduced), the bridge is the flagship for a new corporatist capital. Capital being the operative word.1

This phenomenon isn’t confined to London alone, however. New York’s Highline and Chicago’s Millenium Park are similar examples of pseudo-public spaces that have been built on private money, and are thus beholden to private interests. In a 2013 article in CityLab, Alex Ulam notes that ‘unlike the great public parks built in previous eras, the new generation of flagship parks is almost completely dependent upon massive private support for its survival.’2

We may soon see a similar phenomenon in Malaysia: a place called Gurney Wharf.

As with the Garden Bridge in London, this is an ambitious project spearheaded by a (state) government, but bankrolled by the private sector. According to a press release from the Penang State Government, Gurney Wharf ‘will be created on land to be reclaimed by … a subsidiary of premier lifestyle property developer Eastern & Oriental Berhad (E&O).’3 The developer will bear the cost of the project.4 Land reclaimed at Gurney Drive will be surrendered to the Penang State Government by E&O, and in exchange, the company will have the right to reclaim land elsewhere for development.5

This certainly seems like a win-win situation, but it does raise questions about the future of the public park at Gurney Drive. Once construction is completed, will Gurney Wharf be gazetted as a public park? Who will be responsible for the maintenance and management of the park — and who will foot the bill? Despite the flurry of press releases surrounding the project, none of this has been made clear.

While the soft-focus renders show beautiful seaside spaces filled with people, other parts of the plan are equally fuzzy in their presentation. The eight-lane expressway that cuts right through the centre of the linear park has been underplayed in both press releases and artist’s impressions.6 As noted by prominent blogger Anil Netto, ‘the eight-lane highway is not easily visible in the artist’s impression as it is almost hidden by trees!’7

The masterplan makes the scale of the highway a little clearer. For some critics, Gurney Wharf appears to be ‘nothing more than a makeover of the Penang Outer Ring Road (PORR) project’ which was mooted by the former state government.8 While proponents of the plan have argued that this road is necessary to prepare for future congestion, it has been demonstrated time and time again that building roads does nothing to ease congestion in the long term.9 In the words of transport expert Samuel I. Schwartz, ‘policies intended to reduce congestion, usually by building more and wider roads, lead to lower productivity’.10 It is also worth pausing to reflect on whether such car-centric planning is the way to go in terms of sustainability. 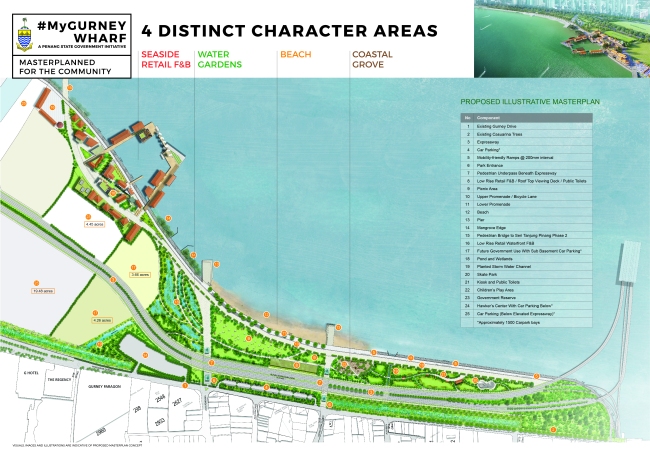 The proposed masterplan for Gurney Wharf. Image via Buletin Mutiara.

Equally vague are future developments on parts of the site — including the two ‘government reserves’. Once again, concerns have been raised over the vagueness of the masterplan, and where future private developments will fit into the new Gurney Wharf. Will new developments on reclaimed land soon block the view of the sea for current residents of Gurney Drive? Again, this remains unclear.

What’s crucial now is that Penangites are informed about the details of the plan. In his blog, Anil Netto has urged the state government to clarify how the reclaimed land at Gurney Wharf will be divided, the route the eight-lane highway will take, the precise location of a 50-acre private residential development in relation to Gurney Plaza — among other things.11 This strikes me as an eminently sensible request. The public deserves to be informed about the details of this project, which will irrevocably reshape one of the best-loved stretches of Penang’s coastline.

There is no denying that, properly executed, a new public park at Gurney Drive could provide considerable amenity to residents and visitors alike. For decades, Gurney Drive has been an important social space for Penangites — a place where families brought children to dip their toes in the water, and where couples came to enjoy dinner under the shade of the casuarina trees. The people of Penang deserve a public park that continues this tradition.

[1] Will Self, ‘The slick new ad for the Garden Bridge says it’s paradise. Well, it could be ‘, The Guardian, 16 March 2016. URL: http://www.theguardian.com/artanddesign/2016/mar/16/will-self-garden-bridge-london-thomas-heatherwick.

[11] ‘<a href="http://anilnetto.com/economy/development-issues/eight-lane-highway-gurney-drive-gurney-wharf/"Eight-lane highway planned between Gurney Drive and Gurney Wharf‘.